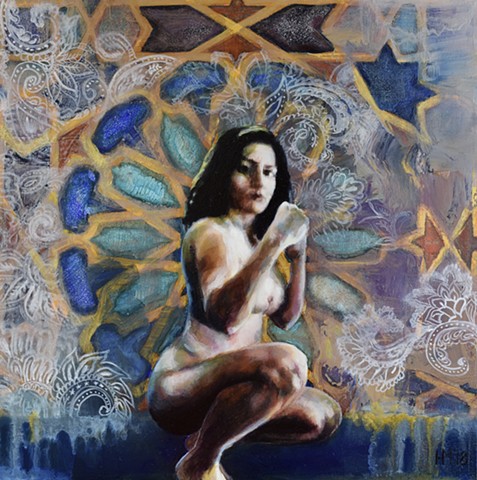 Venus is soft and strong. She finds strength in her vulnerability. In the goddess of love, fertility and victory, I see her superpowers as being the ability to transform, to create, and to overcome.

The day after my father’s died (5 days after my little brother’s died) I returned to work. Massaging other people, helping others feel better, hearing about their problems helped to keep my mind occupied. The structure and predictability of work felt safe. . But what I could no longer do was paint. Not in my normal capacity. I felt spacey, forgetful, unable to concentrate. Painting creatively requires complex thought processes and my brain was occupied trying to process my grief. . I needed to keep my hands moving though, so I colored. I colored mandalas. I colored them by my dad’s bedside and taped them to the wall where he could see them. After he passed, I started painting copies of fabric prints. This had the same kind of therapeutic effect as coloring.

In creating this new painting I wanted to incorporate my father’s Iranian aesthetic. This image was formed by overlapping a strong geometric Islamic design with a softer Persian paisley pattern in the background. The figure was painted from an old film still of my younger self rising and strong. I chose to paint myself as Venus because I see her as a heroine and I think it’s important for all of us to be able to see the hero inside of ourselves.