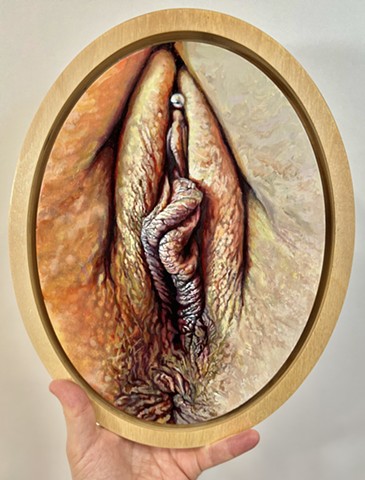 This vulva portrait is the first to include a direct reference to the clitoris and also anus. Because the glans of the clitoris is generally hidden beneath the clitoral hood, this special organ has not been visible in any of my paintings so far. However, this model's piercing acknowledges that amazing organ designed purely for pleasure. In the words of Sophia Wallace, activist artist who coined the term Cliteracy, to combat scientific ignorance and cultural taboos, "The clitoris is not a button, it is an iceberg."

I decided to include the anus in this image, firstly, because I never realized how beautiful it was. Secondly, I wanted to create an opportunity to start a conversation regarding this area's connection to pleasure. The nerves in our pelvic area are very interconnected and sensations often cross over.

Another less fun fact regarding the connection between women's reproductive system and elimination anatomy/physiology:

Roughly once a month, to assist your body in shedding it's uterine lining, prostaglandins are secreted. These same hormones which cause muscle contractions in the uterus often migrate down into the intestinal tissues causing that phenomenon known as period poops and crap cramps.

If you've ever wondered what causes those frequent trips to the bathroom when on your period, I hope I helped to solve the mystery!